Ok, I know I haven’t exactly kept up with this baking lark, but it’s just been too hot! However, yesterday it rained and I took the opportunity (and also advantage of rather too many bananas in the cupboard) to have a bash at banana loaf.  The recipe is in this book: 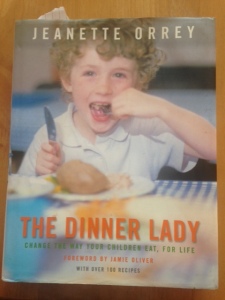 And it wasn’t too tricky. I had ridiculous eggs in the fridge that were clearly from hummingbirds or something, but I dropped an extra one in and hoped for the best.  The recipe says cook for 40 minutes, so after 40 minutes I duly took it out.

‘Looks a bit wobbly. Stick a knife in it.’

I let out a sigh, stick a knife in it and… ooops – gloopy cake mixture. What the hell?

So the cake went into the oven again, and actually ended up cooking for almost an hour before it looked done. We had to stick foil over it to stop it burning on top. Here’s my result and here’s the photo of how it should look. I wonder if you can tell which is which? 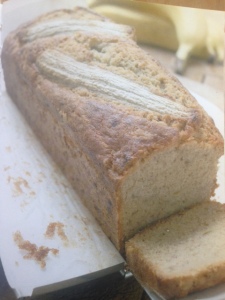 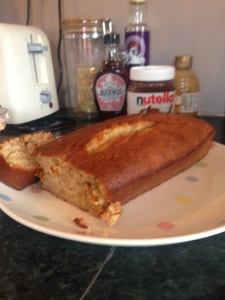 One thought on “Tilly goes Bananas”