I don’t often review the work of fellow writers. Partly because I don’t have as much time as I’d like to read all the books of my author friends and I don’t want to leave anyone out. Partly because I’ve always felt slightly uncomfortable commenting on someone else’s hard graft, especially knowing how it feels to work on a novel for months and months and then wait, biting nails and stomach in knots, for the reviews to come in – and not always favourable. I don’t want to give unfavourable reviews, but I also find it impossible not to be honest.

Recently, however, I wondered whether I could approach this problem in a different way, and so I thought that perhaps I could talk about books that I’ve been particularly impressed with. So here it is, my new feature: I WISH I’D WRITTEN…

To coincide with the lovely Holly Martin’s blog tour, her newest release,  The Guestbook, will be the first book under the spotlight. 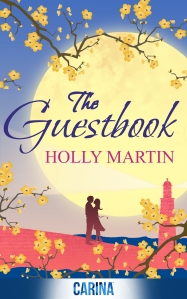 What Holly does with this book is something new and fresh. The story is essentially a love story, told within the pages of the guestbook of Willow Cottage.  It’s such a beautifully simple idea and yet not one I’ve seen done before.  This is also a story that explores grief, loss and guilt.  It’s not all darkness, however, as the book also contains snapshots of the lives of all the visitors to the seaside retreat in all their glorious diversity and eccentricity. The love story between cottage owner, Annie, and the brother of her dead husband, Olly, will have you sighing with longing, but the antics of her other guests will have you laughing out loud. Because it is told in short diary-like entries, the pace never has time to slacken or any scene drag on longer than it should do.  The use of different fonts to show which character is speaking is a stroke of genius in its simple effectiveness.  It’s beautifully written, with a satisfying outcome that you wish for with all your heart. How the story reaches its resolution, however, is completely unexpected and will throw you a gorgeous curveball.

And yes… I wish I’d written this!

You can buy Holly’s book here.

About Holly from Holly herself:

I live in sunny Bedfordshire in a house with round windows. I studied media at university which led to a very glitzy career as a hotel receptionist followed by a even more glamorous two years working in a bank. The moment that one of my colleagues received the much coveted carriage clock for fifteen years service was the moment when I knew I had to escape. I quit my job and returned to university to train to be a teacher. Three years later, I emerged wide eyed and terrified that I now had responsibility for the development of thirty young minds. I taught for four years before History Off The Page came to my school to do a Tudor day. I now drive round the country in my little white van, dressing up as a Viking one day and an Egyptian High Priestess the next.  I love to write. The characters do exactly what I want them to do, most of the time. Sometimes they do seem to go off and do their own thing without my permission. It is complete escapism into a world where I have full control. I’ve been writing for four years now, every spare second I have, I’m scribbling ideas in a notebook or typing a scene on my laptop. I have written three romantic fiction books. Changing Casanova and The Chainsaw Masquerade were recently shortlisted for the Festival of Romance New Talent Award. My short story, One Hundred Proposals, won the Belinda Jones Travel Club short story competition and was published in the Sunlounger anthology. The Sentinel is my first published novel.